The Hellenic Association of Consulting Firms (HELLASCO) is a non-profit organisation founded in 1981, representing Greek consulting firms that are mainly involved in the provision of consulting services for design, planning and implementation of technical and development projects and programmes of the public and private sector in Greece and abroad.
The core aims of HELLASCO are:

The governing body of the Association is the General Assembly, which is held at least once a year, in December.
The Association is run by the Board of Directors, which is elected every two years and consists of nine (9) regular and two (2) deputy members.
In order to achieve its aims, HELLASCO through its Board of Directors, undertakes a host of actions and measures, such as: 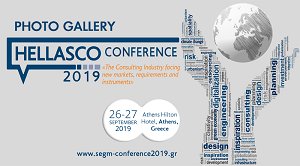